I’m surprised at how many people don’t know what Fringe fest is. So a quick run down:

So what did we see when we got there?

First a little disclaimer, we did no planning beforehand. I tried…. really I did. I looked at the Fringe catalogue that was kindly donated to me from a friend at work but just flicking through the pages was quite daunting. It also didn’t have reviews of the acts. It was literally like a classifieds. A small picture, a blurb, a date and a price. The more famous acts got bigger real estate but that just put me off.

I got mixed opinions on how we should tackle the fest, some say wing it, others say plan for the big events and just make up the rest. I went with the former but not out of choice. So a bit of technology came to the rescue and just instinct.

We arrived in the early evening to our hotel (my god the hotel planning, that’s another story). I then proceeded to download the fringe app, it had two important features: The “nearby now” icon. Basically a google map mashup with all the fringe locations near to you combined with the fact if they are playing right now. The other was a link to the half price ticket hut, this is similar to the TKTS office in Times Square, NY. Basically a ticket hut that sells half price ticket for performances on the same day and at some point on the next day. I assume to get as many bums on seats. Also around the ticket hut was a large square with various street performances. These were actually just as entertaining as the venue’d performances.

So of course we just hit the hut first. We wanted to see something worth paying for, while standing around outside one of my friends managed to find an app that actually had user generated reviews of the performances from the fringe. I quickly combined the two, me looking at half price ticket hut LED scrolling board showing all the tickets for the day and my friend just reading out all best shows from his phone (in the background was a guy playing the most wonderful Spanish guitar with some immense finger plucking). We literally just took the first match we found, a comedy play called: Truth.

So we got to the venue without trouble (thanks iPhone app). Once inside getting to the right place was a bit of an issue. It dawned on me that these were pretty old buildings in Edinburgh, narrow stone staircases, twisting passages. Just this venue seemed like a castle. Yeah, I got lost.

We found the room and queued outside. We were too late for the good seats. So we sat at the back. I regret that for most of the fringe I didn’t take many photos or videos, so I got nothing for this play.

Saying that it was easily the best play I had seen and I had not seen many plays, so my opinion is pretty much invalid from this point forward. The best I can compare it to was a play off-off Broadway (yes we were that cheap) called, “Channelling Kevin Spacey.” Anyway this was a sole performer with some helping hands at the back. Essentially a very animated actor (aren’t they all?) started off by telling people a simple story then descends into theatrical madness. It involves a plasma ball which is used to channel various spirits and people. I have to say his ability to change characters was astounding (still remembering my really good theatre review credentials? Good) very fast and fluid.

Just putting this here to say we did see a lot of free comedy and I have rethink how the economy is going to work if the the free stuff is that bad. I mean seriously it was really, really bad. There was this one woman who ended up getting the audience to make her online dating profile. I’m pretty sure the title of this event had the word comedy in the title. Then again it had the word free and now those combined makes me hiss like a cat.

Ok look at this picture. 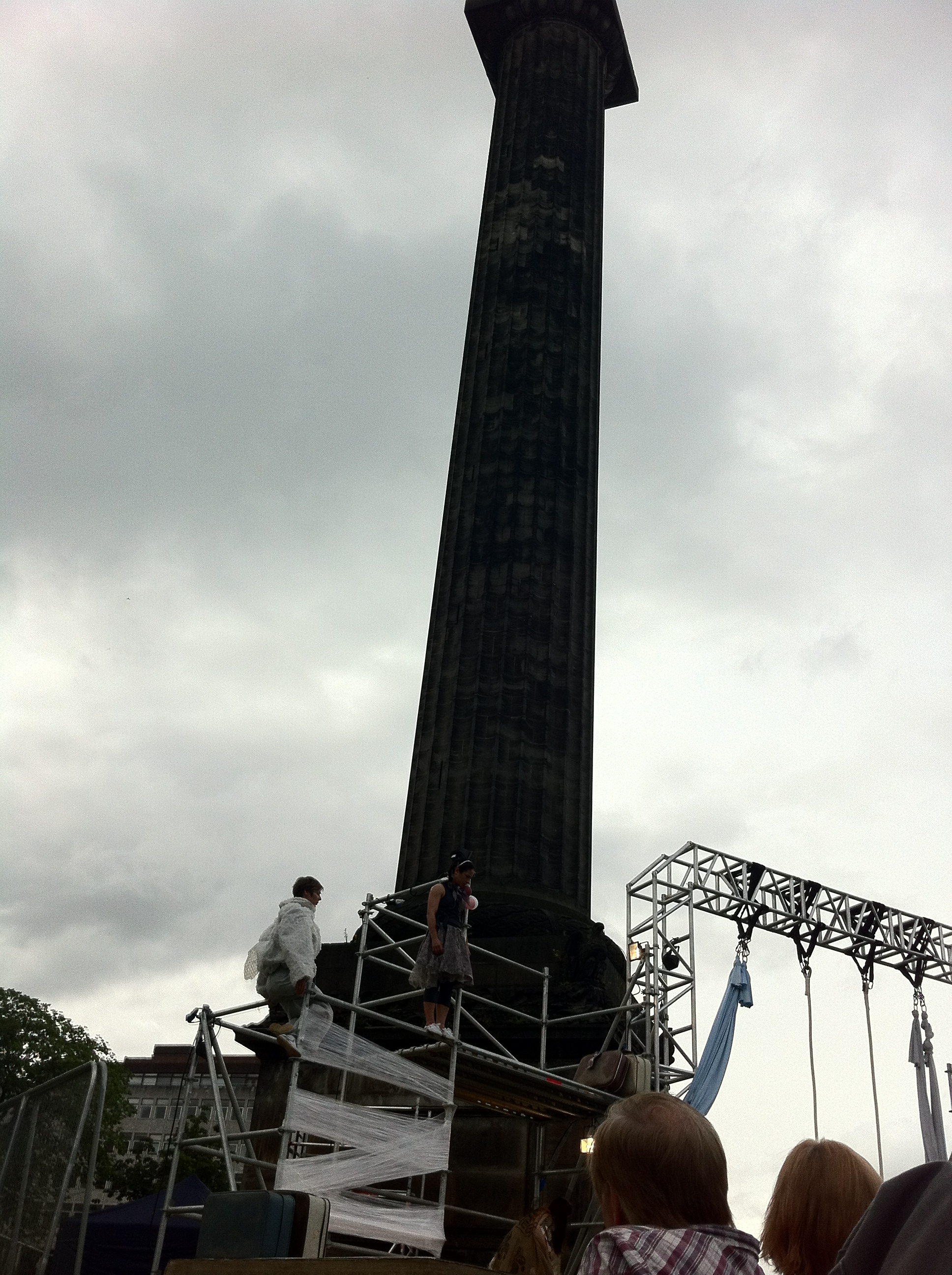 Do you understand what is going on here? Basically this picture represents what this play is about… Still not got it?

Exactly because I didn’t get it either. It was like a combination of taking heavy painkillers while someone is twisting your foot all the way around a full 360 degrees. You can see what is going on but you don’t feel any of it then you ask yourself what the fuck is really going on? How can my foot do that and still be normal, at this point you don’t even acknowledge the dance. Like seriously, how can my foot do that? Yes! What you are imagining about your foot is more interesting then this dance. What I am making up about your foot is more interesting and engaging.

Now I did make this clear to a woman who was going around looking for feedback. I should’ve told her about the foot.

This was another highlight. I deliberately looked out for an improv group and this was pretty much all they had.  It was well worth scoping out early and trying to get good seats is a must as well as being able to project your voice. Audience participation is the key here. And dammit I didn’t get a photo or anything, I really need to sort that out. I did manage to get a girl to act like a penguin for the whole show, so I give this a thumbs up.

So improv (look it up)

After a quick recovery effort (me curled up on a bed eating fish and chips and listening to a podcast waiting for my codeine to kick in) we went to late night comedy showing. Two things drew me to this particular event: One he was Japanese, my fascination with Japan and it’s culture knows no bounds. The other was that it mentioned parodied movie trailers. I was sold! We had to trek across the city center battling the Saturday night party foot traffic but after an arduous hill climb we made it to “The White Horse” pub. The first reaction from my housemate, “Is this it?” I proceeded to walk straight in, at this point the iPhone app had my complete trust.The bar to my right and the regular punters sitting on the left didn’t sway me, I just pushed through to a small room at the back and the heat just hit me. This was going to be a sweat-fest. An average size (surprisingly not small) Japanese man in a jumpsuit was at the other end of the room.

I though this is not the guy, he was like the usher. Getting people in and finding seats for them. Make friendly chit chat with people around him. By the time I noticed this my body temperature was already screaming no.

The final day’s main event was a treat for the ears. The Oxford Gargoyles are a Jazz A Capella group. They look like university students but man can they sing. I’ve heard A Capella before but to see it done live is certainly a treat. They covered a number of their own songs as well having a mega mash-up of some Disney classics. I’m not sure what audience they were aiming at but I guess it didn’t matter the quality of their vocal talents just seemed to make the songs look like little play things.

One of the things I found quite significant was how they were placed on the stage, it did add to the stereo effect and they drew up on it create a more dynamic effect. In one song people were stepping back forth to the audience on the two sides of the stage, this raised and lowered the tonal rage both on the left and right. I’m not sure if they were aware of this technically but a lot of thought went in to the choreography, so kudos to those unseen directors.